PKFZLing: Neither shocked nor surprised. 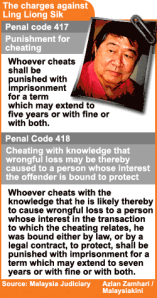 When Najib Razak announced a holiday until Aug 10, I was already suspicious about surprises in store for the nation.

I wasn’t surprised of his arrest. It was a matter of time. I was surprised though that the Cabinet, headed then by former PM Mahathir Mohamad, could be so naive as to be cheated by Ling about a PKFZ land!

Read full story here and tell me if you are not surprised.

Another story surprised me today. News about young millionaire Jho Low. The STAR called it “world exclusive”. What does that mean?

A double dato’ had a byline on the story. Wow. There were also many parts to the main story. A strategy to divert people from the impending arrest of Ling?

Surely not, as present MCA prez Dr Chua Soi Lek also said he was ‘shocked’ by the news.

Are you impressed by Jho Low? The STAR story did nothing to probe further on what kind of ‘close’ relationship he has with ‘powerful’ Malaysians.

If they did, it would have been a fine story.

I am also thinking it would have been better for Najib and Rosmah to pay Jho Low money for public relations than APCO, don’t you think so?