But this soup isn’t delicious, not even on a cold rainy day.

I finished writing this insignificant story about 12 midnite after a two hour press conference last night (June 15). My editor in Malaysiakini placed it in such a non-prominent place that you might miss it. But I’d like you to see how crazy Umno has become…this maybe and is just the tip of the ice-berg.

Days are going to be terribly exciting in Penang, I think. Here’s part of the story: 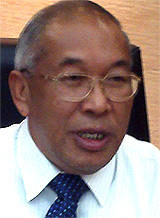 A group of Umno leaders in Jelutong are extremely angry with their state party secretary Azhar Ibrahim for speaking to the press about the purported demise of their branches.

During an emergency two-hour press conference in Hotel Grand Continental in Penang late last night, the embattled leaders challenged Azhar (left) to prove that the branches were indeed deactivated when none of them had been notified of the closure by the party’s supreme council.

The group insisted that the business of announcing division or branch closure was the duty of the top leadership, not a mere state information chief as Azhar.

According to the group, the state Umno had received a positive letter from the supreme council following recommendations from an investigative team from Kuala Lumpur which visited the branches in May last year.

The five investigation officers were said to be tasked by Umno president and Prime Minister Najib Abdul Razak to ‘find out the truth’ behind the suspension and allegations that the branches had no proper members lists.

Following their probe, the team had found only four out of the 17 suspended branches questionable, said the leaders.

“The other 13 were found to be in order as we have produced members with their identity cards to show that the members lists are proper,” the leaders added.