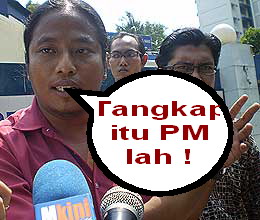 Will police take action on these jokers who deprived Malaysians of a free and fair elections?

The report was lodged on the quartet after a not so smart Abdul Rashid told the whole world that it was Abdullah who ordered the EC to suspend use of the ink. No one believed Abdullah when he said that his ‘suggestion’ was not a ‘directive’. Not even a school kid would buy this joke lah.

The ink was supposed to prevent cheating in the recent 12th General Elections. With the ink, we would have had a massive earthquake, plus 12 after shocks perhaps. But all we got was a Tsunami. Mana cukup? (where got enough?)

But what I really want to know is what happened to the RM2.4 million and 48,000 bottles of inks from India?

Has anyone noticed the river at the back of their houses turning blue-black recently?

MCPX, Abdul Rashid unwittingly revealed that the cabinet had objected to the use of the indelible ink and that he was ordered to take the blame for the decision.