Why don’t you say it in court? 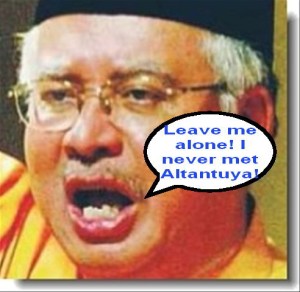 Sometimes I think ministers and politicians treat Parliament as their comfort zone, or their safe haven. After all, they have immunity for saying controversial stuff there.

It’s very easy for a PM-in-Waiting to go on a CLEAR-MY-NAME campaign before he actually assumes his premiership as Parliament is not like the courts. There are no prosecutors, no defense lawyers, nor are there any lawyers doing a watching brief, like Karpal Singh.

Yes, people are the judge in Parliament. And there are lots of prosecutors there in the name of Opposition MPs. But there is only so much one can do in Parliament. You have to wait hours before you get your turn to speak or ask questions. I know, I’ve seen how things work there.

He would most certainly be asked who ordered his two bodyguards to drop the bomb on the Mongolian lady…and  a host of other questions…but that is…if you have a FREE, FAIR and CREDIBLE court.

But this is feaudalistic Malaysia. Don’t you think that ministers or politicians can get away with just about anything by saying… “I have never met the said woman… ” ?