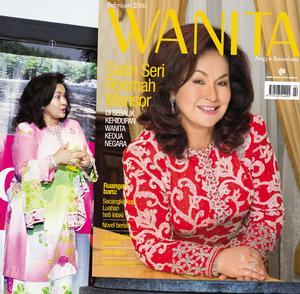 Rosmah Mansor “outburst” against internet users were quite unbecoming of a soon to be FIRST LADY. Rosmah is wife to controversial Deputy Prime Minister and Defense Minister Najib Tun Razak (embroiled currently in the Altantuya murder). As Najib gets closer to the post of the country’s premiership (oh, so near yet so far!), both husband and wife have started reacting to stories in the cyber world of their alleged involvement in the case.

In “Stories about me on Internet are not true“, Rosmah says:

“When I am patient and quiet, people resort to slander. I kept quiet previously thinking that people can decide for themselves but now even ridiculous stories are being believed.

“Fitnah (Slander) is not a small sin that can be easily forgiven especially when it involves trying to bring disrepute to others,” she said.

“Don’t believe those who use deceit to get positions. They are willing to fool the community to get what they want. May Allah forgive them and may they return to the right path.”

The only problem with this news report from the STAR is that it doesn’t tell us in what context did Rosmah say these things. That would be quite unfair to her. What kind of ‘certain allegations’ were she responding too that led her to such a conclusion?

It’s a sloppy job to carry Rosmah’s rantings without first publishing the news about her husband’s respond to Raja Petra Kamaruddin’s post on Altantuya. Her husband is mulling legal action against the later for involving him in a crime he denies being linked to.

Here, let me provide a note to the soon to be FIRST LADY:

Rosmah, high profile politicians face these kind of curses every day. One has to rise above it. Frankly, it comes with the job and the status.

It happens also when a society is starved of information, so people turn to the internet and hope to get some great news.

It happens when a country does not have free media or a credible one, so we look for information on the internet.

It happens when politicians are too high and mighty that it would be impossible to ask you directly about everything.

So, when you become FIRST LADY, will you see to it that we have a free media, hmm…Rosmah?

Or like former prime minister Mahathir Mohamad who recently hosts a blog at chedet, you could start blogging, too.

In this way, we get to ask you DIRECTLY about anything and everything under the sun.

Posted by sloone on May 2, 2008 in ALTANTUYA SHARIIBUU, ELECTIONS GENERAL, MALAYSIAN MADNESS, MEDIA and tagged HEADS UP!, POLITICAL.