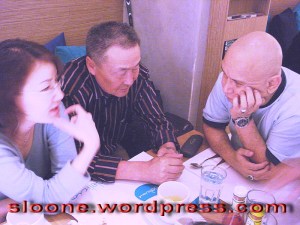 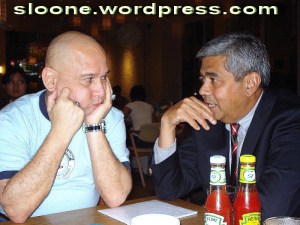 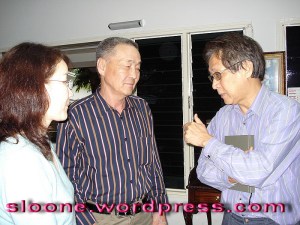 Altantuya’s dad, Stev Shariibuu must count himself lucky to have met Malaysian most famous blogger, Raja Petra Kamaruddin in Bangsar on 28 April. He met other well-known personalities, too.

RPK told Shariibuu he’s planning to launch a T-Shirt campaign for Justice for Altantuya on May 1st. He showed Shariibuu the sample of the T-shirt on his computer and the man was quite pleased with it.

Everyone is aware that his commentary on Altantuya on Malaysia-Today was indeed very hot: Let’s send Altantuya’s murderers to hell.

I found it very difficult to hold back my tears as Din continued with his narration of what Dr Shaariibuu said at his press conference. Yes, I am a very emotional person as many may have suspected by now. But I can also be very stubborn and stiff-lipped as well when facing an adversary, as the Special Branch officers from Bukit Aman have discovered. I am what the Malays would call ‘marah nyamuk, bakar kelambu’. And I would not hesitate to deny my body food and water as an act of defiance just to prove to my jailors that they may incarcerate my body but they can never own my mind or break my spirit. But hearing what Dr Shaariibuu had to say ‘broke’ me. Even my degil got tamed.

“Let’s bring these bastards down,” I told Din. “Let’s launch a ‘Justice for Altanatuya: restore Malaysia’s dignity’ campaign’ or something like that. These assholes must be sent to hell.”

Sariibuu also met with the Malaysian DJ Blogger (formerly the Reluctant Blogger) Din Merican, who was with Raja Petra.

From our conversation, I was able to learn firsthand how he felt losing his daughter, Altantuya who would have been 30 years old on April 28 (Mongolia birthday, Roman calendar is 6 May). I could see the strain on his face of having to bear this terrible loss, and the responsibility of taking care of his sickly grandson, and his family.

I told him that Malaysian public is very concerned as evidenced by their reactions to Raja Petra’s “No Holds Barred” piece which was carried on http://www.malaysia-today.net just two days  ago (25 April). He replied that the Malaysian public should be kept informed about the case and his own plight since the mainstream media is not doing so.

Earlier, Shariibuu and his lawyer met with Lim Teck Ghee at PKR advisor Anwar Ibrahim’s office in Section 16. Lim told the duo that he used to work in the United Nations office in Mongolia. He offered his condolences as well.

Seems like the whole world knows what to do as Malaysians and human beings, everyone does, except it seems, our two top leadership, Abdullah Ahmad Badawi and Najib Tun Razak.

Well, I did NOT vote for them, so I don’t feel so ashamed. Those of you who did…well?

Posted by sloone on May 1, 2008 in ABOUT HUMAN RIGHTS, ALTANTUYA SHARIIBUU, ELECTIONS GENERAL, MALAYSIAN MADNESS, MEDIA and tagged HEADS UP!, POLITICAL.